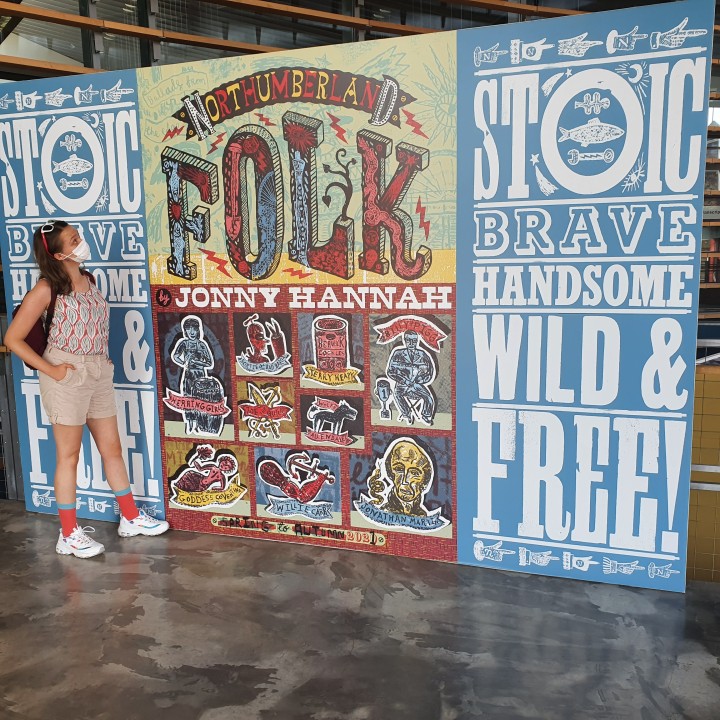 I was fortunate to be able to visit 3 of the exhibitions (minus Berwick as it is too far for me) and each of the collections looks at folk stories from the local people.

Obviously the illustrator has drawn upon miners history, looking at the miner’s clubs, coal and community bands.

Personally, I am really interested in North East mining history because I love to know all about my heritage. Having been a visitor of Woodhorn previous and knowing a lot about the gala, banners and how the mining community lived- I found Jonny Hannah’s work to be a creative enforcement of what I already knew.

Because the collection is in a brightened up white room, the red, blue, yellow, black colours that appear to be a theme in the works are really vivid. I liked The Coal Queen, a reference to the miner’s picnic where a local lass would go to the picnic in her best frock and would be crowned the Coal Queen.

I also liked the Duke Ellington Colliery Miners Helmets, they are a selection of laser cut and painted helmets, inspired by songs that miners would dance too.

As you walk out of the exhibition, look out for Together- eight painted panels outside. Which is a beautiful piece about working together and making our world function.

Next , I visited Hexham Gaol where I saw Hexham Miscellany.

This collection is a visual feast, using research from the community and the Hexham Courant Archive Jonny Hannah as created drawings from the stories. I must admit I was really shocked to hear how rebellious the Hexham people were.

I was interested to learn about the countess of derwentwater, looking at the folk totem I don’t really know who the countess was. Nor does anybody else for that matter. Apparently she was evicted from Dilston Castle for claiming her rights as a countess.

I had never heard about Joe the Quilter, who was a hermit of Warden- he made quilts for society and had lots of money. Now after his wife died he started to invite strangers into his house and one day in 1826 he was found dead. Someone (we don’t know who) stabbed him.

I finally got to see the Allendale Wolf, I have heard of many sittings in and around Hexham and I finally saw it at Hexham Gaol.

The final collection that I visited was Cocks’ Medley and Rant at Morpeth Bagpipe Museum. I have been to Morpeth many times but never been to see the Bagpipes, who knew that Morpeth was so musical?

When you walk into exhibition upstairs in the museum, you are aware of the musical delights that Morpeth has had to offer. Museum founder William Cocks is the main theme in the collection as we see him sit by the fire place with his skeletal companion, and the illustrated ensemble includes artists and wizards, wonder women and rogues.

I interviewed Jonny Hannah , the illustrator who was commissioned to create work for Museums Northumberland on my podcast.

Northumberland Folk is on till 31st October 2021. For more information visit https://museumsnorthumberland.org.uk/