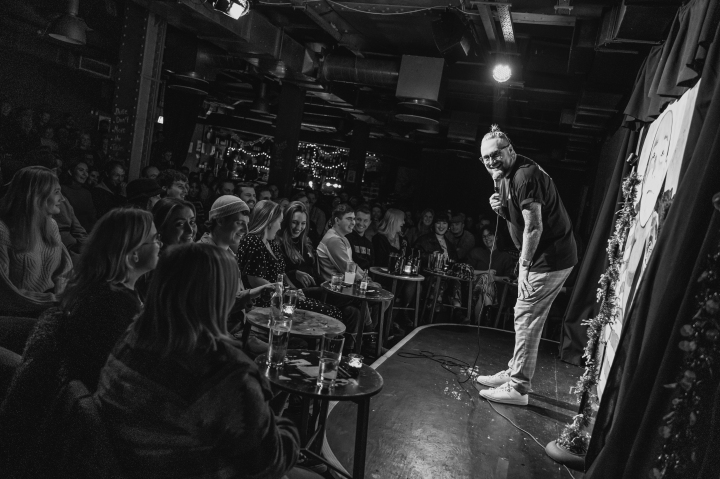 I am really excited to introduce Si Beckwith. Si Beckwith is a stand-up comedian and writer from Newcastle Upon Tyne. Si gigs regularly and prolifically, up and down the country, making sure to hone his craft on all manner of stages, developing into a respected, reliable and most importantly very funny stand-up comedian who has a creative approach to all he does.

I also believe that they are a pioneer in the North East culture scene.

Hi Si, how and why did you start your journey into comedy?

I guess it starts with the fact I’d always written, short stories, scripts, poetry and anything else creative I could. I always loved comedy too. It was something me and my sister used to watch together a lot, I remember a lot of Comedy Store shows on The Paramount Channel, and a load of Bill Hicks DVDs. I had a Frank Skinner box set VHS collection that I wore out.

I’d worked a number of dead end jobs, done the rounds of most Newcastle call centres and thought I needed to do something creative, and comedy had always been there as something I wanted to do.

I’d been really, really shy until I was about 17, then an absolute gobshite in the years following, but it felt like a nerve wracking thing to do. But I booked myself into an open mic night (Long Live Comedy at The Dog and Parrot) just to see what it was like. Then to do it.

And I did it. And I’m still doing it.

This is always so tough to answer. Just a daft lad trying his best. I think I’m very honest on stage, silly, and quite anecdotal. I do a lot of compering so there’s a lot of crowd work in there, but lots of stories too.

You are from Newcastle, do you find that the Geordies have a strong sense of humour? -When you tour your comedy, do you find that you get the same reaction or do you have to almost change your set depending on the location?

There’s definitely a particular sense of humour in the region. Maybe cos the weather is so rubbish, and we’re an afterthought politically, we’re a really humble but incredibly daft place for comedy. There’s some really weird, silly, alternative comedy here, and I am absolutely on board with all of it.

You also adapt place to place, your references should travel, but it’s lovely being able to talk about Hebburn or Jarra for a bit at a local gig. Your set may be the same wherever, but there’ll be slight changes, or things to go with that keep it fresh, exciting and relatable place to place.

What inspires you when writing a new comedy set? What is your creative process when you are writing?

Working bloody hard. There’s just no substitute for it. Inspiration strikes at the oddest times (for me, it’s the shower/bath or on the toilet usually….) and you’ll keep endless notes in your phone, and then it’s workshopping those daft ideas into actual jokes.

Lots of rehearsing, pacing around the home office chatting to myself, writing exercises, open mic nights, trying new bits. There’s no set way to do it, and I’ve never found one set way that works best, it’s just a mix that helps harness the funny.

Oh, and lots of coffee.

Being a comedian, you have to capture the attention of the audience quite quickly, how on earth do you do that?

Own that stage. An audience is judging you from the moment you walk out there. Own it. Be prepared to go with the gig, if something funny has happened in the room, acknowledge it. If the room is odd, talk about it. And put the work in first. If you turn up with good material, you got this.

You have various podcasts, tell us about those?

Ah yes, I have done a few podcasts over the last few years. I have a massive passion for good audio as a medium, and I think podcasts are a great leveller in terms of getting good quality content out reasonably cheaply.

At the moment, myself and proper ratio journalist Ellie Kumar are putting out Mosh Pet. A podcast all about alternative music and culture in the North East. We have some huge things planned for 2023, so it’s all very exciting having only launched this one last year.

There’s still episodes of older podcasts I did like The Greatest Film You’ve Never Seen (with Ken McGuinness), Si and Harry’s Mixtape (with Harry Ford) and Grease 2 Is The Word (with Kelly Rickard). The fact I’ve done a podcast about Grease 2 says it all really, but podcasts about niche passions are right up my street, and that’s what I like to listen to.

Got a few other things planned for next year too, producing a couple, and looking to make some more awesome things next year.

Working for Newcastle Castle, Alphabetti Theatre, Narc Magazine and The Cultural Spring- you clearly have a passion for North East Art and Culture, where does that passion come from?

The passion I guess comes from the fact I didn’t really feel like the arts was for me until I was in my mid-20s. I loved music, played in bands, but I never felt quite comfortable in a theatre. I have always loved spoken word. I studied English Literature. But the arts felt very middle class, and I am very much not that.

Stand-up opened those doors though, once I did that, I was around poets and theatre makers a lot more. We worked on things, found ways to work together. There was always good conversation. I’d always written too, so once I started writing for NARC there was even more exposure to local culture beyond just the music and comedy scene, then taking on the role as their web editor meant I had to be plugged into everything.

And it’s so, so good! Then various freelance roles followed. At my core, I want art to be for everyone, especially those marginalised or who feel like it’s not for them. I want voices that are underrepresented to be given a platform to make and to create. I want people up here to engage with things, because it is for them, and it should be by them, about them, and influenced by their voices too.

What do you love about the North East Culture seen?

The variety. There’s so much good stuff being made up here. Over the last year, I saw possibly my favourite two theatre shows I’ve ever seen (No.9 and Whale of a Time, both at Alphabetti Theatre), I saw some incredible comedy, live music, spoken word, took in some stunning art, took part in making things and was constantly immersed in a range of brilliant creativity.

The passion is vital too. There are so many working class people here, striving to just create, to make, to do. And so many fascinating voices who use art as an outlet to tell their stories. Perhaps, that’s it for me, the stories. I love the stories here, the history, the heritage and the now. The stories will always be here, and there are some absolutely wonderful people here to tell them.

You are a Trustee of The Exchange Theatre, North Shields, where do you see the future of the North East Culture going and how can we as audience members support this.

I am. It’s all very exciting for a working class lad from Hebburn to be in this position. I think the future for North East Culture is bright in terms of the talent here, the passion and the drive. But it’s going to be a challenge. We’re a region that suffers economically and politically, and there’s a cost of living crisis which will hit people up here hard.

The arts are often made to feel like a luxury, but they can be an escape, they can be affordable and they can be an important, expected and accepted part of people’s lives here. I think we’re all pulling in the same direction mostly to make stuff that everyone can enjoy. That’s so important.

As audience members, it’s just about going to stuff as much as you can, supporting artists you like where you can. It doesn’t have to be a financial burden either, times are really tough, but share stuff you like, shout about artists you like, make things, take part, engage. If you can afford to financially support by going to shows, buying merch or subscribing to Patreons or the like, please do, but don’t skint yourself. Just watching, sharing, engaging and enjoying is all vital too. Talk about it with mates, recommend things, it’s great up here, and it’s great because the audiences are so bloody class too!

Tell us more about Felt Nowt,why is it a revolution of comedy?

Felt Nowt is something I’m hugely proud of. It’s the world’s only not-for-profit comedy co-operative and Community Interest Company. What that basically means is, almost all comedians in Tyne and Wear, County Durham and Northumberland are working together to put on gigs, deliver workshops, find and create work for each other, make comedy content, make things happen in the region and make comedy for everyone up here.

There’s such a range of talent here, and a real variety of styles and personalities, that it makes for a strong scene. We’ve got regular gigs all over, and our goals are to have regular gigs in most towns that can support one.

We want comedians in the North East to forge as much success for themselves as they can, to have audiences absolutely delighted with how much comedy they can get easy access to, whether that’s through going to a live show, or catching clips online or subscribing to our Patreon for loads of content relatively cheaply.

It’s grown so much over the two years since we started. It’s worth saying too, we started during the COVID pandemic as we all lost so much work, and just started putting on some livestream gigs from a rehearsal room at Alphabetti Theatre (and made them really good, with audience interaction, proper staging…) and built from there. And we’ve just kept building.

We have huge plans, but want to create a sustainable future for North East comedy, and make comedy intrinsic to North East culture as we have such a huge heritage for it.

We’re all working together, pulling to make big things happen and are a real grass roots movement striving to make things better for a region we absolutely love.